A Letter from Walter Boa to his son Samuel, giving him stern fatherly advice.

Samuel was 19 in 1858 when he received this letter, with its beautiful copperplate writing, describing him as "young and thoughtless". Unfortunately, there is no record of his reaction.

The letter is transcribed below. 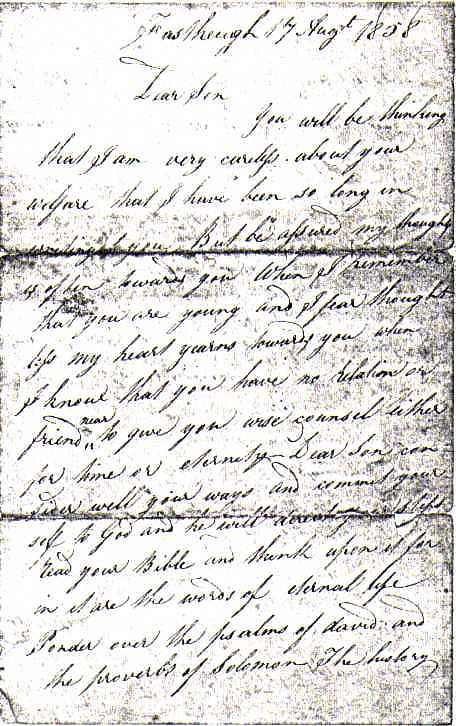 You will be thinking that I am very careless about your welfare that I have been so long in writing to you. But be assured my thought is often towards you when I know that you have no relation or friend near to give you wise counsel either for time or eternity. Dear Son, consider well your ways and commit yourself to God and he will direct your steps. Read your Bible and think upon it, for in it are the words of eternal life. Ponder over the psalms of David and the proverbs of Solomon, 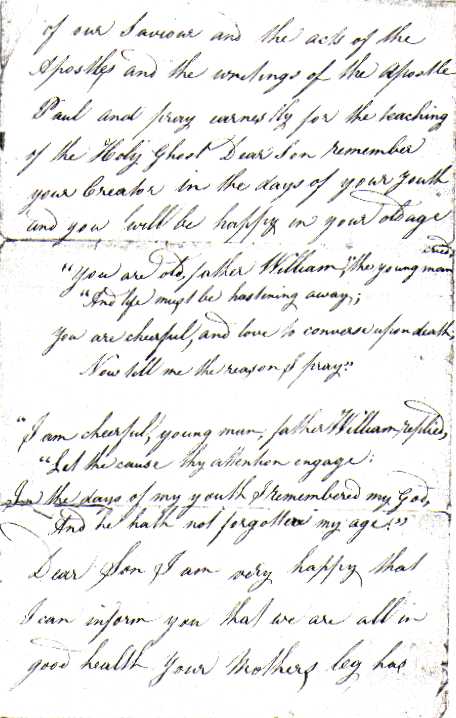 the history of our Saviour and the acts of the Apostles and the writings of the Apostle Paul and pray earnestly for the teaching of the Holy Ghost. Dear Son, remember your Creator in the days of your youth and you will be happy in your old age.

"You are old, father William," the young man cried,
"And life must be hastening away;
You are cheerful, and love to converse upon death;
Now tell me the reason I pray."

"I am cheerful, young man," father William replied,
"Let the cause thy attention engage;
In the days of my youth I remembered my God,
And he hath not forgotten my age."

Dear Son, I am very happy that I can inform you that we are all in good health.

Your Mother's leg has been very sore for a long time back. It has troubled her very much. But we should not complain. We have faired better than we deserve. I cannot write you many news as you have few acquaintancies in this place. Your Brother William and I was at Melrose Lamb Fair. It was a fine scene for him. It is the largest lamb fair in Scotland. It was a slow selling Fair for wedder lambs. Ewe lambs sold very high, the best sort 13 and 14 shillings each. I did not hear any of of the prices of the best kind of the wedders but the middling lots was about 10/6. This was the prices of the Cheviot kind. 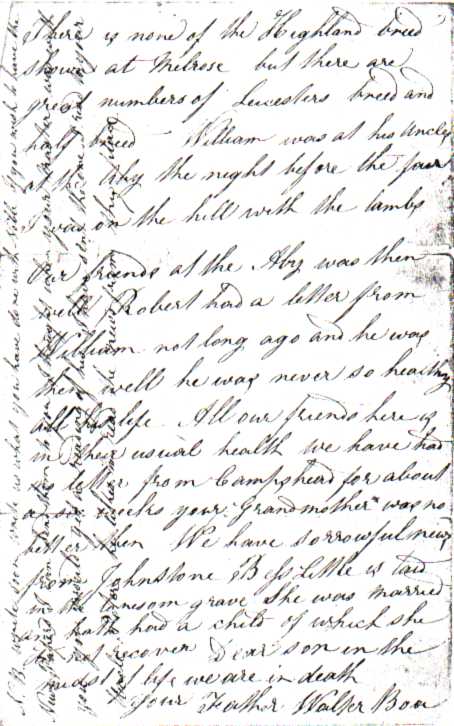 There is none of the Highland breed shown at Melrose but there are great numbers of Leicesters breed and half breed. William was at his Uncle's at the Aby the night before the fair. I was on the hill with the lambs. Our friends at the Aby was then well. Robert had a letter from William not long ago and he was then well, He was never so healthy in all his life. All our friends here is in their usual health. We have had no letter from Campshead (Walter's in-laws' farm) for about six weeks. Your grandmother was no better then. (Walter's mother-in-law, Mary Little, was 79 in 1858.) We have sorrowful news from Johnstone. Bess Little (Walter's wife's sister) is laid in the lonesome grave. She was married and hath had a child of which she did not recover. Dear son, in the midst of life we are in death.

N.B. Write soon what you have done with Noble. If you wish to have the newspapers I can send them to you. I thought when your master was with you, you would get a reading of his. I have sent the one I read to your Uncle Peter. (Walter's elder brother farmed on the island of Arran.) He likes to read the news from this place.

[BACK TO THE BOA FAMILY TREE]